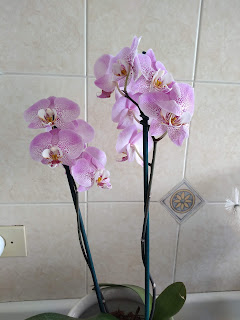 This is the orchid I bought myself at the beginning of April, with the same blooms still going strong. I´m amazed it has lasted so long, and there´s no sign of it flagging yet. They´re not cheap but certainly worth every penny.

Posted by Sansthing at 11:05 No comments:

Patience is a virtue

If patience is a virtue mine just got flushed away. I´m sitting here waiting for the plumber who has been due to come and put right a poorly done job of his from a couple of weeks ago. I have been chasing him for over a week now and even though I saw him twice and he promised to come twice he has still not appeared...

The flush on my toilet was not working properly and after I had a lot of trouble tracking down and buying the necessary parts online,  he came to fix it. Except that after a couple of days the flush malfunctioned again and now wants to run continuously unless I plunge my hand in the cistern and closed the flap manually. Give me strength...my back is not up to this!

Today is São João here in Brazil - St John´s Day. I suppose it is similar to Guy Fawkes in that there are bonfires, fireworks and traditional food. There are lots of parties with dancing to accordion music and sometimes a peasant wedding is enacted. Dress usually involves checked shirts, dungarees and straw hats. The festivities are called June parties and last the whole month. The origin is tied up with pagan summer solstice celebrations, taken up by the Catholic Church and brought to Brazil by the Portuguese. It is all great fun with a nice family atmosphere. 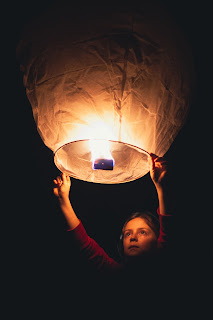 Part of the tradition was to release fire balloons, when I was a child you could even buy small ones to send up yourself and people would also make large ones which could be very elaborate. There were so many that at night the sky would appear to be full of moving stars.They used to drift down when the wick eventually burnt out and were chased by gangs of neighbourhood children (myself included!) because sometimes there were little prizes or even money dangling from the balloon on bits of string. Since they were made of paper, some of the balloons would catch fire especially if it was windy and a fireball would come plummeting down, not always harmlessly. Eventually the government woke up to the fact they were a fire hazard and balloons were banned, but even today you can occasionally see an illegal one flying, despite the heavy fine imposed if the culprit who released it is caught.

Photo by Ben Wicks at Unsplash

I´ve finally thrown in the towel and been to see a specialist about my back which is still troubling me. I had an X-ray which showed up some problems so he sent me for an MRI scan today for a more detailed look. Until I get the results in a couple of weeks I have been told not to lift anything or do any exercise, not to stand, sit, walk or lie down for long periods and no housework...what´s left?

Something I read in a blog last night reminded me of a little adventure many years ago in Rio de Janeiro. My husband and I, and two other young couples decided to go to a town in the mountains near Rio called Teresópolis to trek to a peak called Dedo de Deus - God´s Finger.

It took us a full day to go up a little mountain trail to a small cabin where we were to spend the night. None of us had done anything like this before and we were ill-prepared for such an expedition, I don´t think we even had sleeping bags.

Anyway, when we arrived at the cabin we found it had only one room and one double bed. After a sketchy meal and some wine we decided to try and share the bed, all six of us! By lying cross ways we managed to fit like a row of sausages on a grill. It was bitterly cold and there was no electricity. We were bundled up in all our clothes but I shivered all night, unable to sleep and wanting to spend a penny. I didn´t want to try and get up as I would have disturbed everybody. As it was, when one of us turned over everybody else had to turn too. Longest night of my life!

The next day we headed back down the mountain in remarkably good spirits (the resilience of youth!) and I nearly killed myself tripping and falling off the path. If I had done this two yards sooner or two later I would have fallen quite a way but where I went over there was a small ledge which I landed on. My guardian angel must have been working overtime that day.

Well, I did my test and it came back negative. Hurrah! But...my daughter and her husband are still poorly,  family I was due to visit in a few days have all caught Covid (including my son), and I´ve just heard my son in England and his partner are down with it too...it is unbelievable.

Posted by Sansthing at 06:27 No comments: 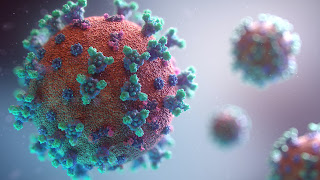 My daughter came to see me last Thursday and we hugged and kissed as we usually do when she arrived and also to say goodbye. She came back with some shopping for me Friday but wasn´t feeling well so kept her distance and didn´t stay. Saturday she rang to say she had tested positive for Covid and was feeling pretty rough. By today, Sunday, her husband was also ill.

I have naturally put myself in quarantine just in case. I feel ok so far but will take the test anyway in a few days as I am due to visit some family this coming weekend, including a baby. The timing is really off as there are a christening and birthday coming up with a large family trip planned. Oh boy!

Posted by Sansthing at 18:23 No comments:

I had just become used to leaving home without a mask...they had only remained compulsory on public transport and in clinics, hospitals etc. Now the government are increasing the number of places where masks must be worn again, schools, public buildings and so on. The number of Covid cases is increasing rather alarmingly here, hence the new rules. At my age and with my medical history I don´t want to put myself at risk so I have decided to go back to wearing a mask whenever I go out. It is not such a big deal after about two years of having done so. Also as we are getting into cooler weather it will not be so uncomfortable.  Oh well...

Still on the Jubilee theme, I watched and enjoyed all the pageant, except for the 'human' puppets. The animal ones were wonderful, so creative and well done, but the large dolls bothered me. For as long as I can remember I have really disliked puppets, from the Laughing Policeman in arcades to ventriloquist dummies to life-size (or larger) figures...they really creep me out! 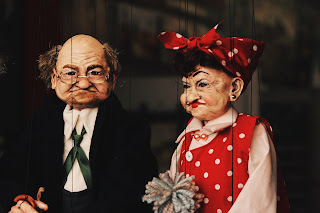 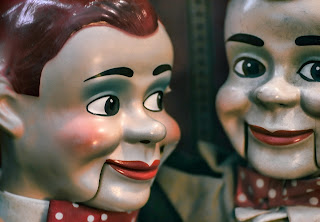 If they talk or move, that´s it! I especially didn´t like the very large figure in a white dress, I actually had to look away. Silly, I know, but we all have our foibles.

Photo by Pablo Hermoso on Unsplash

I have been trying to watch the Jubilee celebrations on YouTube. The coverage is actually pretty good if you visit various sites and I have enjoyed what I have managed to watch so far. Today I shall try to see the concert, which has received a lot of praise and tomorrow I shall catch up with today´s events.

I find it extremely heartwarming to witness such a positive spectacle when the usual news is all doom and gloom and the many people who organised the whole event have done an amazing job.

I can vaguely remember attending a Coronation party at the British Embassy in Rio de Janeiro when I was about five. I was given a Coronation mug which sadly went awol at some point. 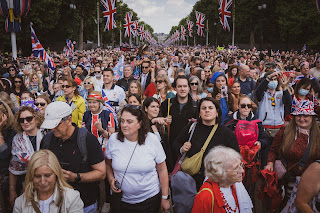 Photo by Jonny Gios on Unsplash 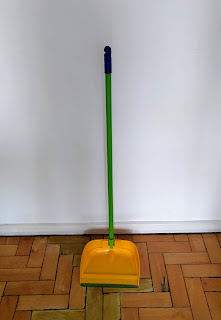 My back is still pretty bad even after four days of taking it easy. Thank goodness I have this long-handled dustpan. I can pick up the post or anything I´ve dropped and put Toby´s food and water bowls down without bending over. I can hobble slowly about for up to fifteen minutes at a time then I start listing to one side and have to sit or lie down for a while. Fortunately my freezer is well stocked with my batch cooking so I just have to heat my meals in the microwave. I must admit I´m feeling pretty fed-up at the moment, though.