Another view, another window... 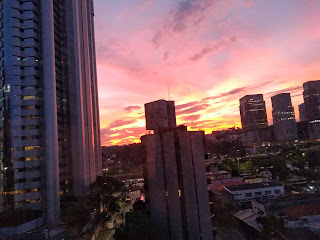 This is the view from another window in my apartment, on the other side of the building. We often have lovely sunsets although I´d rather see the horizon without obstacles in the way. Out of curiosity I checked the view I posted recently from another window on my faithful Silva walking compass and it reads West, and this window with the sunset reads Northwest...I´ve always understood the sun rises in the East and sets in the West! Summat´s wrong!

Before I retired I worked at a certain consulate in the visa section where I dealt with the applicants and their paperwork before passing it on to an officer for analysis and a decision. One of the people I handled was a hot air balloon pilot who traveled to competitions all over the world. He was so delighted when his visa was granted that he offered me and my family a free balloon flight. It was an offer I couldn´t refuse! 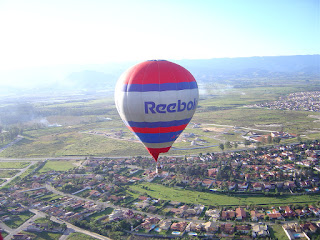 We set off one Saturday to a nearby town called Pindamonhangaba (yes, that really is the name of a town!), myself, daughter and son in law and toddler and one of my sons. It was really interesting seeing the balloons laid out and filling with hot air from roaring gas burners. The baskets were quite small so I went in one balloon with my daughter and my son flew in another. Son in law and toddler stayed behind as we took off and my little granddaughter wailed as she saw her mother slowly disappearing into the sky. 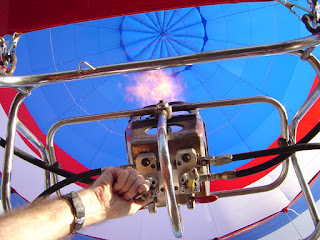 Both my daughter and I have a fear of heights so it was a white knuckle ascent as we rose, each clutching the basket with a death grip. As we started to drift across the landscape things got easier but I must confess I never felt entirely comfortable. I had imagined it might be windy up there, but of course since you are floating at the same speed as the wind the air felt completely still, and so silent you could clearly hear dogs barking and people going about their business. 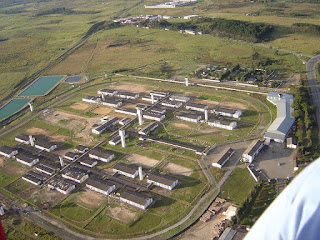 At one point we drifted over a cluster of buildings and the pilot explained he was taking us higher as the buildings were a prison and people (prisoners or guards?) had been known to take potshots at the balloons! After about half an hour we landed safely and were picked up and taken back to base. All in all it was an enjoyable experience and a most unusual way to spend a Saturday.
Posted by Sansthing at 08:09 6 comments:

A view from my window 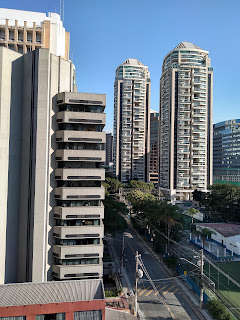 A beautiful crisp sunny day here, and this is what the view from one of my windows looks like. I´m on the eighth floor and luckily not really overlooked. Not the peaceful green rolling hills I´d prefer to see, unfortunately. In the bottom right corner is the edge of a five-a-side football field . There are three fields altogether and they are in constant use. What with games and championships going on until midnight or later, it gets a bit noisy with the excited fans cheering their teams on.

The bottom left corner shows the roof and upper windows of a popular restaurant and bar where the weekend overflow crowds stand drinking on the pavement until the early hours. There´s another bar on the opposite corner where the same thing happens, right under my bedroom window. So, it is not exactly peaceful round here. Luckily I´ve found over the years that I have become so used to the noise that it doesn´t bother me too much, unless there is a drunken argument or fight. 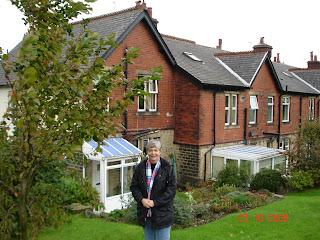 This was where I lived in Marsden, Yorkshire. A bit of a contrast! From my bedroom window there wasn´t a building in sight, just hills.

Yesterday I had my second Mothers Day lunch. My daughter was away for the first one a couple of weeks ago which I celebrated with my son and his family and some of my grandchildren, so she made up for it by taking me to lunch at an Indian restaurant with my son in law. I love Indian food but it is not very well known here and there are very few places which serve it. It was absolutely delicious and I had a lovely afternoon, she had also brought me a basket of edible gifts so I have a good excuse to indulge myself. A little spoiling never hurt anyone.

Posted by Sansthing at 11:36 No comments:

Well, it looks like I have drawn the short straw vaccine-wise. According to the news neither the EU nor the UK will accept my Coronavac vaccine for entry into Europe or England. The Camino de Santiago in Spain which I had to cancel a year ago and hoped to do next spring and my plans to spend this Christmas in England with family have all gone up in smoke.

Why on earth the government here gave most of us a vaccine which has yet to be approved by the WHO instead of using the proper ones I have no idea, although it wouldn´t surprise me if price hadn´t something to do with it.

So, what now? I don´t know if at some point it would be possible to get re-vaccinated, maybe when vaccines become available privately here and you can actually choose which one to have. The other option is quarantine in the UK which costs nearly 2000 pounds, way too much for me.

I had another virtual court appearance today although thank goodness I didn´t have to speak, the opposition lawyer is rather intimidating. We heard the two last witnesses and as far as I know my presence is not required for the next stage. The lawyers will present their arguments to the judge and she will make a decision. If it goes in my favour, which it has every time so far, the other party will then appeal...and the whole merry go round will start again. A touch of Groundhog Day.

We are getting into autumn here now and thank goodness the temperature has finally dropped, it is around the low twenties during the day now. There is nothing cosier than being able to snuggle under a duvet instead of lying on top of the covers perspiring while a ceiling fan blows hot air on you.

After lunch if I´m not busy I like to lie down with a book and then have a snooze. Since it is cooler now I usually cover myself with the duvet even though I am dressed. What I cannot understand is the following...my feet are bare but covered while I am reading, as I doze off they get colder and colder until they feel like a couple of blocks of ice, even to touch...yet at night when I go to bed in pj's and bare feet, when the ambient temperature is lower, my feet are fine, not cold at all. I know the solution is to wear socks in the afternoon, but I can´t help wondering why this happens. One of life´s little mysteries, I guess.

Posted by Sansthing at 11:29 No comments: 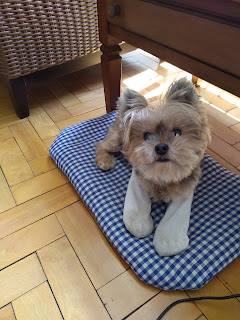 I gave Toby a bath today so he is not best pleased with me. He´s wearing socks in the picture because every so often he starts licking his paws nonstop and it is the only way to stop them getting sore. After a few days I take the socks off and he is fine for a couple of months. Go figure!

I don´t believe in bathing a dog too often, I don´t think it is either good for them or natural. I have a friend who baths her Yorkie once a week. He spends all his time scratching frantically and she spends a fortune on special shampoos. Toby gets a bath about every three or four weeks and only goes to the groomers when he needs a trim every couple of months. After his daily walk I wipe his paws and that is it.

Unfortunately the older he gets the more he hates his bath. He had the same groomer from when he was a puppy and was always delighted to see him if we met on the street, but hung back and dug his heels in if he was going for a bath, so I would have to carry him. Sadly his groomer died last year and since then Toby shakes all the way to the pet shop. Imagine being blind and being handled, washed and trimmed by a stranger. Poor old soul.

If I could I would trim him at home as I feel sorry for him and guilty at making him go through this ordeal but I know he requires a professional groomer. I can´t just leave his fur to grow, unlike short-haired dogs, Yorkies´ fur grows in the same way as our hair and needs trimming to prevent knots and tangles forming. At least he gets most of his baths at home but even so he really does not enjoy the experience.

I don´t have a bathtub, only a shower, so we sit in there each perched on a stool as he is too small for me to bend down to and I use the spray attachment on him. Needless to say it is a bit of a performance as he keeps shaking himself and I get pretty wet too. After it is all over he gets a special treat, and there is nothing wrong with his memory as he begs for it right away by spinning in circles.

Nothing very exciting has happened over the last few days, I seem to be stuck in my little rut waiting for the days to pass when my vaccination will supposedly take effect, one week to go. I must confess I went out to a family lunch on Sunday, Mothers Day here in Brazil. No hugs or kisses of course, but there were flowers and chocolates and a lovely meal.

I´m supposed to be doing some knitting for grandchild no. 10, due in a couple of months, but I seem to have lost my inspiration. I think the pattern I´ve chosen is too complicated and I am finding it hard to concentrate. I´ve also been asked to decorate a wooden tray for his toiletries so I may start with that first. If it turns out well I´ll post a photo! I´ve always embroidered a little cross stitch picture for each grandchild with their name on but naturally need to wait until he´s born in case there is a last minute name change. Mum and Dad are not in total agreement yet...

Posted by Sansthing at 15:02 No comments:

For some reason I keep thinking today is Friday instead of Thursday, maybe my brain is short-circuiting. This week I went to the farmers market as usual for my fruit and veg and bought some bananas. Here you buy them by the dozen or half dozen, not by weight. Usually they give you one extra but this time I hit the jackpot. 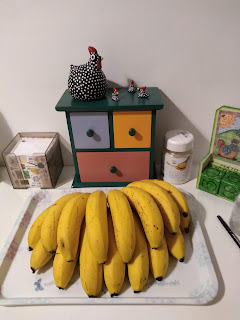 There are sixteen in the picture, with the one I have already eaten that makes seventeen! They cost me the equivalent of one pound sterling. It´s a good job I like bananas but even I can´t eat that lot before they become over ripe. I usually peel and freeze some, they keep for a long time and are delicious when defrosted and warmed in the microwave in their own juice with a sprinkling of cinnamon.

Posted by Sansthing at 14:16 No comments:

21st with a difference!

A few years ago it was my eldest granddaughter´s twenty first birthday. Not for her a big party or booze-up with pals, she opted for a family adventure. 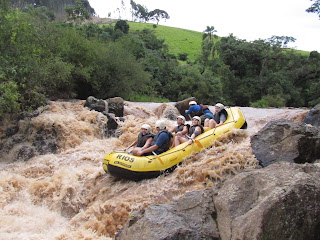 Whitewater rafting with Mum, Dad, sister and Granny. A day to remember, I can tell you. That´s me at the back next to the paddler!