It is surprising how many things you find you need to do when someone is coming to stay! One of my granddaughters will be here for a few days to look after Toby while I go for an op.

Naturally I want to leave the place nice and clean and tidy, larder stocked, Toby bathed, clean linen and towels put out, and so on. I have been pretty busy for the last couple of days but I think it is all done now thank goodness. No blogging for a bit though.

At about ten o'clock tonight they started banging on saucepans with lids, spoons or whatever, standing at open windows or on balconies all around the neighborhood. The sound was very loud and clear. It is a form of protest against the president, especially when he is making a broadcast or being interviewed on TV. The loud noise carries and is indicative of the country´s mood as it happens nationwide, not just here. I don´t know what the specific reason was tonight as I have given up watching the news and TV in general, it is too depressing. I only hope that when change comes, as it surely must, that it happens in a peaceful and democratic manner. I lived through the years of dictatorship here as a teenager and it wasn´t the best of times. 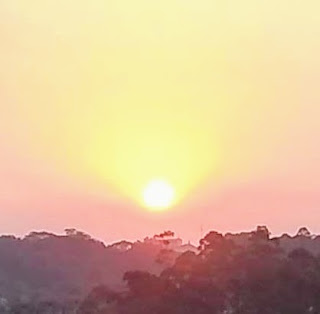 As seen from my bedroom window today - the haze is pollution!

Posted by Sansthing at 15:59 No comments:

I worked in Friern Hospital in the ´70s for a year or so as a student psychiatric nurse. It was a mental hospital built originally in Victorian times as an asylum, and absolutely enormous. In the past it had been self sufficient with its own bakery, brewery, laundry and farm and several additional villas and had housed up to 2,500 patients. It reputedly had the longest corridor in Europe!

Quite frankly I did not enjoy my time there and gave up my course before qualifying. It was a pretty grim place and many of the patients had spent most of their lives there and were very institutionalized. If you had the time to chat to the patients there were some very sad stories as well as interesting ones. One very old lady had been seamstress to Queen Victoria and another, with a very upper-class accent, had run away from home to march with the suffragettes in London.

The hospital eventually closed down in the ´90s due, I believe, to the ´care in the community`initiative which meant many patients were discharged into the community and the demand for psychiatric hospital beds greatly decreased. While that sounds like a good idea I think many people fell through the cracks in the system. I can´t help wondering whether a thoroughly updated, bright and welcoming hospital  wouldn´t be a better and safer option for them, especially those living on the streets.

To set the scene - swinging London, late ´60s. I was in my early twenties and had moved to Hammersmith  where I shared a ground-floor maisonette with two other girls. My "room" was actually a partioned off alcove next to the kitchen and I had been living there for a couple of months.

I was on my own one night as my flatmates were out gallivanting, and went to bed where I did some knitted until I felt sleepy. I stuffed the knitting into its carrier bag and slipped it under the bed where it would be out of the way and switched off my bedside light.

As I lay there drifting off to sleep I heard a rustling sound coming from under my bed. Being near the kitchen I thought maybe a mouse was investigating the carrier bag so I switched on the light and had a look but couldn´t see anything. This happened a couple more times until I got up and put the bag in my wardrobe. This all implies that by now I was wide awake. I tried to get off to sleep again but this time I was disturbed by a woman´s voice quietly calling my name several times, followed by the sensation of my bedclothes tightening over my legs as if someone had sat down on the edge of the bed.

Thoroughly frightened I leapt out of bed and ran around the flat turning all the lights on. It was cold as the heating was off by now so I got back into bed to keep warm and waited for my flatmates to come home. I must have dozed off eventually as I woke with a start to find one of them bending over me to turn off my bedside light.

The next day I told them what had happened to me and was told the following...

The maisonette was originally lived in by an old lady, who was on her own. Her only relative was a brother who was in South Africa. One day she fell down the cellar steps, broke her hip and died down there as there was no-one to hear or help her. She was found eventually but obviously it was too late. The brother inherited the property and was now our landlord.

My flatmates said they had both been through similar experiences to mine with the calling of their names and especially the sensation of someone sitting on the bed while they were in it. They had chosen not to share this information with me as they did not want to frighten me or put me off renting the room as they needed my share of the rent and also had never felt threatened by the happenings. I was pretty annoyed but had no reason to disbelieve them, they weren´t silly teenagers - one was a physiotherapist and the other a ground stewardess at Heathrow.

Anyway, I lived there for a while longer and thankfully never experienced anything like that again. I really have no explanation for what happened, all I know is it was very real and I was wide awake. If I had known about the old lady and my flatmates´experiences maybe I could have imagined it, but the fact that I knew absolutely nothing rules that out. One of life´s mysteries I guess.

I should like to point out that I don´t believe in ghosts as such and am not easily spooked. The room I am writing this in is my study, but it used to be my father´s bedroom and he actually died in here a few years ago. I am quite comfortable using the room and never feel anything untoward.

At the same time, I believe... ´there are more things in heaven and earth, Horatio`...

Pottery run...or should I say walk?

Today and most Mondays is the day I take my pieces to be fired. Since I can´t have a kiln in my flat for health and safety reasons, as mentioned in a previous post, I am lucky enough to have a studio within walking distance where I can take my pots for glazing and firing. I go on Mondays because there is a technician there at lunch time but classes don´t start until two, which means social contact is kept to a minimum. It is also good for me as it is a long walk there and back.

Wednesday is my "making" day when I am actually producing pots although I also work on them other days as it is a step by step process. I am so lucky to have something I can do at home which keeps me interested and occupied during these difficult days.

I am looking forward to my walk today as it is a nice sunny day and somewhat warmer than of late.

I have come up with a solution for people who have excessive amounts of money. From Gates to Bezos, Rihanna to Musk, billionaires who can never spend it all even with stunts like flying into space and who can´t leave it all to their children at the risk of ruining their lives - the answer is simple - have a maximum wealth limit for everybody on the planet. Any money they make above a certain limit could be put into a central global fund which would then be used to improve the lives of the less fortunate and care for the planet. The rich could still be well off but not too the point where it becomes obscene.

A totally impossible dream, but wouldn´t it be nice? 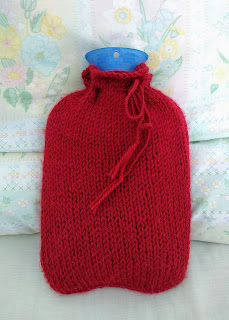 I´ve had this hotwater bottle for years, stuffed at the back of the bathroom cupboard for so long I´d forgotten I had it - after all, not something you normally use in a tropical country. Thank goodness I came across it a few days ago. I have been using it ever since. We are going through an exceptionally cold spell at the moment and it is no fun getting into a bed with icy cold sheets. Now I have the comfort of cuddling my lovely hot bottle every night, a forgotten pleasure, and surprisingly it is even still warm in the morning. The simple pleasures in life are the best.

I have been printing some recipes off the internet to try and add some variety to my diet. I noticed the other day that I seem to be cooking the same 6 to 8 dishes over and over again. I guess it is part laziness as it is easier to make something you know off by heart! I make all my meals from scratch as I don´t like ready meals and they don´t have the tins and sachets of sauces here that you can get in England. Naturally I batch cook and freeze, as I said, I am lazy and can´t be doing with cooking every day...one of the advantages of living alone...

Vegetarians are not really catered for here, it is catching on but only slowly so it is sometimes hard to find all the ingredients. I´ve noticed that most of what I eat (and enjoy) is pretty hot and spicy. Mostly Indian, Moroccan and Mexican dishes all with an extra dash of cayenne pepper. Thank goodness for the internet, it certainly gives us access to a wide range of things.