Things are pretty dire here at the moment noise-wise. The apartment next to mine and another one floor down are both being renovated.  It sounds as if the work undertaken is major, with sledgehammer blows resounding throughout the day as well as other banging and drilling. It is so constant that Toby has even stopped barking at the noise. I get concerned when I can feel my floors vibrating in time with the blows and only hope nothing is going to give way. Thank goodness my building is about fifty years old and strongly built, unlike more modern ones.

The building work and noise stop at five in the afternoon, by law, thank goodness. Unfortunately a couple of hours later the music bars start up over the road and continue until about midnight. Failing that, someone drinking with a group of friends will open the boot of his car, where a sound system is installed, and blast away until my windows rattle. It really is all rather wearing. 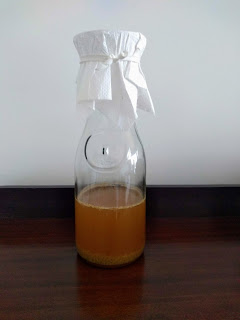 This is my kefir quietly fermenting away. Unfortunately fruit flies don´t only like ripe fruit, they are attracted to anything which is fermenting and want to lay their eggs in the liquid. The fermentation process needs oxygen so you can´t cover the flask with a sealed cap, it needs to breathe. I use a paper towel held in place by elastic as a first line of defense but this on its own is not sufficient. Fruit flies will alight on top of the paper, pierce it with their ovipositor and lay their eggs which will drop into the kefir. Not a nice thought. 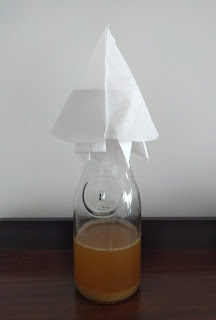 My solution...a paper coffee filter over everything! If a fruit fly lands and lays an egg through the filter it will simply drop down onto the paper towel beneath...no eggs or larvae in my kefir. The filter fits snugly all round so the flies can´t get in by the sides but the kefir can still breathe. 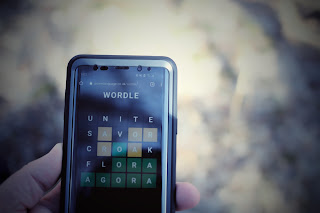 I have just played my 100th game of Wordle. My score is 96% which means I lost four times out of 100,  and nearly half the time I found the word in four goes. Totally unimportant and irrelevant facts in the grand scheme of things but I still enjoy playing and look forward to the challenge with my morning coffee.

Photo by Joshua Hoehne on Unsplash

I finally managed to see my dentist today...and I´m an even unhappier bunny, the cost of replacing my broken tooth and crown is eye-watering! 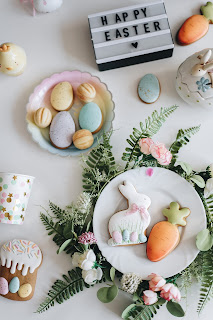 Well, I´m happy to say I had a perfectly lovely Easter Sunday.

It didn´t start off too well as my son-in-law who was supposed to be giving me a lift to the lunch wasn´t answering my messages or calls right up until the last moment and I thought I was going to be left stranded, and I couldn´t get through to two other family members either. It all worked out in the end (he´d smashed his cellphone!) and the lunch was lovely, the grandchildren enjoyed their Easter chocolates and one grandson, whose birthday it was yesterday, loved the gift I gave him.

I don´t usually give Easter eggs as the children get too many anyway, what I like to do is buy something like chocolate buttons and think up an original container for them, the children seem to really like this and I haven´t run out of ideas yet!

Photo by Anna Bratiychuk on Unsplash

It may be Easter but I am not a happy bunny! This evening while eating an innocuous salad for my dinner I managed to break a tooth, which came out leaving a gap and a few jagged bits. Tomorrow is Good Friday so I doubt my dentist will be able to see me before Monday. It really couldn´t have happened at a worse time, especially since I have a family lunch on Sunday.

Once in a while things work out really well...

Yesterday I ordered some newly prescribed and expensive medication online from a chemist as it was cheaper than buying it over the counter. I paid using a QR code which was a new experience for me, but all seemingly went well. There was to be no delivery charge (because of how much I´d spent) and I was told my purchase would arrive within two hours.

Well, it was delivered (by Uber) in under two hours, not only that but I should point out that yesterday was a Sunday! 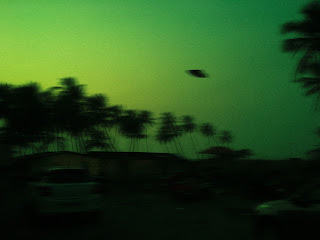 No, I don´t believe in little green men or alien abduction etc, although I think there are things we don´t yet know or understand in the world about us. I do know, however, that some years ago I witnessed something which I can´t explain.

I lived near the village of Marsden, Yorkshire at the time, close to the Pennines and my little house overlooked the moors without any other buildings in sight.

One hot summer night (very rare in Yorkshire!) I was lying in bed unable to sleep and idly looking out of the open bedroom window when I saw a light moving across the dark sky above the horizon. A plane, I assumed. The light suddenly stopped moving and after a moment I rationalized that the plane had turned and was now flying towards me, thus creating the illusion it was not moving.

Suddenly the light started going up and down rapidly in a large zigzag, became still again, then continued slowly on its original trajectory before suddenly shooting off at great speed.

I couldn´t quite believe what I had just seen and got out of bed to check if the window was actually open. I thought maybe I had seen some sort of reflection in the glass. Occasionally the winds coming off the moors (think Wuthering Heights) are so strong they can cause the window to flex and things appear to move. But..the window was open, I was wide awake and had not been drinking...so what had I seen?

I´ve no idea, anyway, but it certainly was strange. That and my ghostly experience in London (tale told in a previous post) are the only times in my life I have experienced anything weird, thank goodness.

Photo by Albert Antony on Unsplash 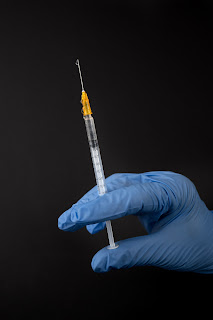 I went for my second booster injection of the Covid vaccine today and while I was at the clinic they gave me a ´flu jab as well, so I now have two sore arms. I can´t see myself lifting weights at the gym to morrow!

Photo by Mika Baumeister on Unsplash

Question: how do you clean windows when you live eight floors up? Answer: you don´t!

My windows are too wide and tall for me to reach out to clean them properly, even on a ladder and using one of those extension things. Plus it is risky. Despite my best efforts I always ended up with that 'V' shape in the middle where I couldn´t reach, like you get on a dirty car windscreen...and the next time it rained they were dirty again because of the pollution. Life is too short for such concerns.

I gave up the struggle a couple of years ago and found to my surprise that my windows do not get steadily dirtier for some reason, at a certain point they stop and unless the sun is streaming in at a certain angle they don´t look too bad at all. Result!