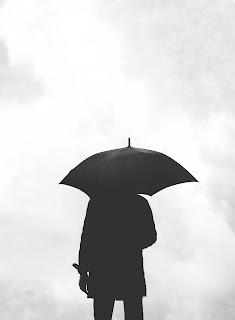 Well, there you go, I jinxed it. Ever since I said Spring had arrived a week ago with crisp sunny days we have had drizzle all day every day, interspersed with thunder, lightning and heavy rain. Every time I look out of the window I appear to be looking down on multi-coloured mushrooms with legs scuttling about.

Photo by Ilya Mondrik on Unsplash

Sunday morning but not a peaceful one - my flat overlooks a ring road about 50 yards away and there is a convoy of lorries passing by blasting their horns in a political protest. I don´t know whether it is for or against the government but the racket is the same. They have been driving up and down for a while now.

We have elections coming up in a week or so and I think there is going to be trouble. The current incumbent, who is quite far behind in the polls, is already implying election fraud and he and his supporters appear unwilling to accept defeat. He is a Trump admirer and seems to be following the same playbook. I dislike him intensely.

As a foreigner I obviously don´t vote and try to avoid politics as much as possible. I was a teenager here when we had a dictatorship, I remember it well. The main opponent appears to me to be the lesser of two evils, I only hope the transition is a peaceful one.

Posted by Sansthing at 18:10 No comments: 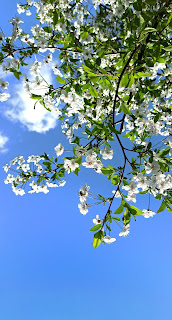 Spring has arrived here in Brazil this week with crisp sunny days and chilly nights although we have a cold spell on the way. I shall try to enjoy it as much as possible before the hot weather sets in.
My late father used to recite a poem about Spring using an American gangster accent for some reason.

The grass is riz

I don´t know where

Some say de boid is on the wing

Because de wing is on de boid

I can still hear him chuckling as he came to the end.

Photo by Aamyr on Unsplash

Posted by Sansthing at 08:42 No comments: 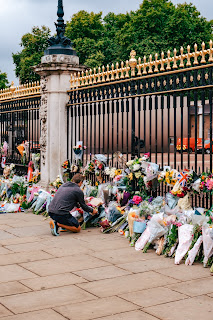 I set my alarm and woke at six in the morning in order to watch the Queen´s funeral. I only meant to watch the first part, in Westminster Abbey, but found I couldn´t tear myself away and ended up seeing the whole thing until the very end. I found it very moving and sad, and was in tears several times especially when the BBC showed her pony Emma and the two Corgis. I wish King Charles III and the Queen Consort all the best, he has some large shoes to fill.

Photo by Samuel Regan-Asante on Unsplash

Yesterday I posted my letter to the pension bods so now it is a question of 'wait and see'. I didn´t register the letter as the postage is four times as much to do so and the delivery time is supposed to be the same. I would love to know how long it takes to get there.

I have just set my alarm for Monday morning, for six o´clock so that I can hopefully follow the funeral of the Queen. We are four hours behind here. I am sad about the death of Her Majesty and have tried to accompany things as much as possible. I have vague memories of going to a Coronation party as a five-year-old, probably at the British Embassy in Rio de Janeiro, and being given a Coronation mug.

On Facebook some time ago I saw a post saying that you should not mock people who mispronounce words as this means they probably learned the words through reading, an admirable habit. I found this observation interesting while smugly thinking it would never apply to me...except that listening to my audio books has made me realise there are a number of words I mispronounce. I am and have always been an avid reader so I suppose my wider vocabulary must have come from books, although I was brought up by English parents in an English-speaking home. It is quite odd to hear a familiar word pronounced in a different way. I wonder if being bi-lingual has anything to do with it.

Posted by Sansthing at 11:32 No comments:

I am not alive!

The Department of Work and Pensions have decided that I am no longer alive and have not paid my pension for two months - this despite the fact that I returned their Life Certificate form by registered post at the beginning of August.

Oh well, here starts the hassle of proving they´re wrong and that I haven´t popped my clogs yet. The form was properly filled in, signed and countersigned by a witness of professional standing in the community. The only instruction I didn´t follow was to return it in the buff envelope provided, I used a proper airmail envelope otherwise it would have gone by surface mail (sea!) and God knows when it would have arrived.

I fail to understand why, in this day and age, they are relying on the postal service for this type of contact. Nowadays documents can be scanned and sent by e-mail instantly, or photographed and sent by cell phone, also instantly. I can´t be the only pensioner living abroad in a country with a poor postal service, it is time the Pensions Department moved with the times.

I am writing to them to hopefully sort this problem out but in the meantime I shall continue to moan. Watch this space!

Years ago, probably after watching some country programme on TV, I became curious about the art of dowsing to find water underground. Did it really work or was it just an old wive´s tale? I still lived in England at the time, and had a garden, so I decided to try my hand at it.

I made two dowsing rods out of wire coat-hangers by cutting them and bending them into 'L' shapes. The shorter legs I inserted into two narrow tubes so that I could hold the tube while the rod was free to swing round on its own.

I walked slowly across the lawn with a rod in either hand, holding them pointing forward and as steady as possible. After a few yards the rods swung towards each other and actually crossed. I tried approaching the same spot from various directions and the same thing happened each time I reached it. To say I was amazed is putting it mildly. I fetched my husband and he had a go too. For him only one rod swung, the other continued to point forward.

I wasn´t about to dig the lawn up to find the water source, drain or whatever (buried treasure?) was causing the rods to move like this so it remained a mystery but we had great fun with guests over the years doing the dowsing test. For most it didn´t work at all but some were successful and quite tickled about it.

I think I managed to convince myself that dowsing is genuine, although how it works and why for some and not others remains beyond my understanding.

The cup that cheers 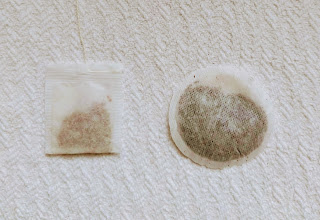 Sadly I am coming to the end of my hoard of teabags bought on my last trip to England. I´ve tried to make them last as long as possible by not drinking tea every day and using each bag twice, but nothing lasts forever.

It´s not as if you can´t buy teabags here but look at the difference in the above photo, a miserly local teabag on the left and a nice plump English one on the right. Tea, or black tea as it is known here, is regarded as a herbal tea and drunk very weak and without milk. I would have to use about four bags to get a reasonable cup of tea and even so it doesn´t taste the same. This is all very sad and I only hope I manage to visit England at the end of the year to stock up again.