There are some large old trees scattered around my neighbourhood, some of which unfortunately are hosts to termites. About once a year these pests swarm and since they are attracted to light you can see clouds of them flying around the street lights - time to shut your windows!

My apartment building is fumigated once a year for termites and cockroaches although I opt out of having my flat done because I don´t want any toxic chemicals around either myself or Toby. When I first bought the place, though, I had it thoroughly treated as there was a built-in wardrobe full of termite holes. In fact I had most of the doors removed except for bedrooms and bathroom in order to reduce the amount of wood around. I replaced these doors with archways which I think worked well.

After living here for a couple of years, one evening after the annual fumigation I entered my bathroom, switched on the light (there is no window) and to my horror a cascade of termites flowed out of the ventilation shaft and down the wall like a torrent of water. The ventilation shaft runs up through the internal structure of the building with an outlet in each internal bathroom covered by a shutter.

I switched off the light and slammed the door while I wondered what to do. Evidently the fumigation had disturbed a nest somewhere and the termites were drawn to the light in my bathroom. Eventually I crept back into the bathroom with a can of insecticide spray and a bin bag to tape over the useless ventilation shutter. Having killed anything that moved and swept up the corpses I thought that was the end of the story.

I complained to the administration and my apartment was given a free fumigation, even down to having the skirting boards injected with poison at intervals (this was before Toby came into my life!). So far so good, I thought that was the end of the story, but...a couple of weeks later, when I was using the loo (as you do), I heard a faint sound as if someone were quietly munching some celery. I managed to trace it to the bathroom door moulding and concluded that some termites had escaped the massacre and taken up residence there. They must have crept in the tiny gap between the bottom of the moulding and the tiled floor and were busily munching away and creating tunnels.

I had to have the entire moulding ripped out and replaced, which was not cheap but at least it got rid of them. Thank goodness they don´t like treated wood so at least my parquet floor was safe. Needless to say I have velcroed some mosquito netting over the ventilation shaft opening and that seems to have done the trick as I have had no trouble since. 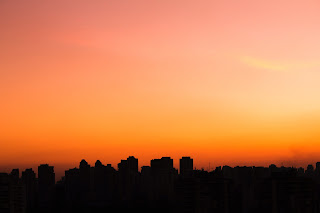 We have not had any rain for 48 days, the air pollution is pretty bad - hence the beautiful sunsets. Things could become difficult soon as the reservoirs which supply the city are very low.

Photo by Ricardo Utsumi at Unsplash

Posted by Sansthing at 06:17 No comments: 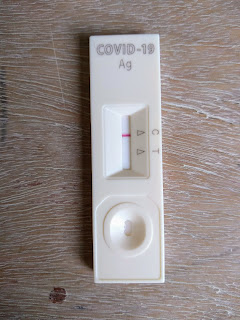 Posted by Sansthing at 07:01 No comments:

Well, I think I am on the road to recovery now but this past week has not been much fun with Covid - I haven´t felt so poorly in a long time. I´m still bunged up and coughing and feeling very tired but I hope to test negative in a couple of days as I´ve had to put a lot of things on hold and I need to get out and about again - especially to physio.

Posted by Sansthing at 07:45 No comments:

I had a lovely long weekend with all the family in a beautiful place. It was a large ranch-style house with 5 en suite bedrooms plus an attic bedroom which slept seven! There was a pool, barbecue grill, pizza oven, games room, sitting room with open fireplace and a massive kitchen as well as a wraparound porch. I think originally the house was some wealthy family´s holiday home. 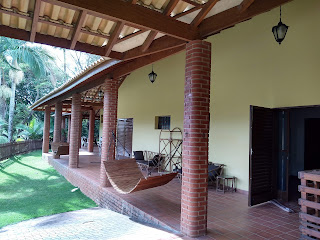 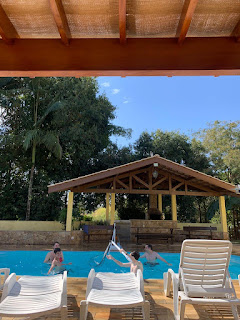 Anyway, we had lots of fun making pizza, barbecuing and playing charades, and a little alcohol was taken (ahem). The nights were nice and chilly so the fire was appreciated. I think I can say a good time was had by all. 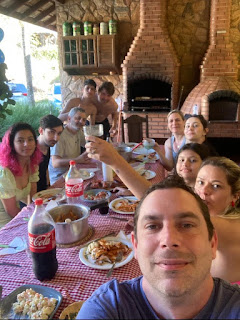 On Sunday, on the way home (a three-hour journey) I started feeling as if I was coming down with a cold and by the time I got home I had quite a temperature. I spent yesterday in bed with what I thought was ´flu but today I tested positive for Covid. Oh well, at least nobody else seems to have caught it so far.

I´m busy as a bee this week as there is lots going on. 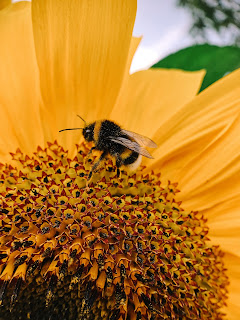 I have started physiotherapy sessions for my back every other day, I took Toby for a test visit at a friend´s house as he will be spending the weekend with her, there is a birthday party tonight for my grandson, the cleaner is here today, and I have to sort out my packing for a long weekend away with all the family - twelve of us are going to Serra Negra, in the hills,  where we have rented a house for three days to relax and have fun, I´ll need it by the time we get there.

Photo by Tania P at Unsplash

I have just realised my apartment is full of round tuits. I finally yielded to force majeure - also known as daughter - and decided to employ a cleaner because of my bad back. I have resisted this for so long but finally ran out of excuses. She came for a day last week and I think I´ll ask her to come every couple of weeks.

Seeing my apartment through her eyes as I showed her around and explained things made me aware of how many little problems I have allowed to accumulate. If something goes wrong and you don´t fix it right away you can become used to the problem and end up ignoring it, especially if you live alone as I do. Just little things like a dripping tap, a jammed shutter or a loose wire. Things you put off fixing with the intention of getting a round tuit sometime! I must do better.

No flies on this old bird!

So...I had a phone call from my "bank" a couple of hours ago. They wanted to let me know they had blocked a large sum from being transferred from my account to another bank today and that there were also several other suspect transactions. I explained that I had not used my bank account for several days and the transactions were not mine. They wanted me to access my account on the phone app to check this information so that I could be reimbursed for the sums taken. This request made me smell a rat and I said I didn´t know how to use the app properly and would go to the bank instead as it just a few yards away. The caller was quite insistent and offered to take me through the process step by step but I still refused.

At the bank, as I´d suspected, it turned out to be a scam. Thank goodness I didn´t fall for it as they were very convincing, but what with someone attempting to use my UK bank card last week and someone else using my ID for a fraudulent phone contract I suspect everything until proved otherwise. 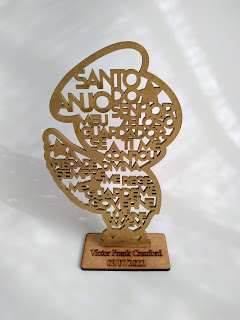 It was my youngest grandchild´s baptism last Sunday. He is one year old now and doing well. I have blogged about his birth, when he spent a week in intensive care and nearly didn´t make it. Sunday was a special and happy celebration for all of us.

Well, I never knew that!

I love collecting random facts, my mind is absolutely cluttered with them. I now have a new one to add to the collection thanks to blogger Tom. Apparently my favourite cologne - 4711 - which I have used for years was also a favourite of Napoleon´s! 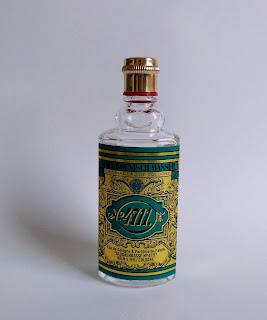 I knew it had a long history and that its name came from the number of the house where it was developed, but the Napoleon connection is new to me. You live and learn!

Posted by Sansthing at 08:17 No comments:

It really hasn´t been my week so far.

On Monday I went to the telephone company to try and change my contract for a cheaper one. During the process they discovered someone had used my ID to take out a contract with them! After a lot of red tape making a fraud complaint I finally went back yesterday to change my contract, which I managed to do, except that the confirmation e-mail I received when I got home had the wrong details. Now I´ll have to go back again.

Today I went to the bank to draw some cash from the ATM using my new debit card from my UK bank. This new card is to replace the one they had blocked after someone in England tried to used it for internet shopping. Thank goodness my bank found the transaction suspicious and it didn´t go through. But, guess what? My new card doesn´t work. The ATM refused to complete the transaction. I contacted the UK bank and they checked and said my card is fine. Now what? It is so frustrating and I have no access to my money.

Modern life and technology are getting too complicated for this old fogey, I can tell you. All this of course on top of my back troubles and toilet saga. I´m glad this week is over.