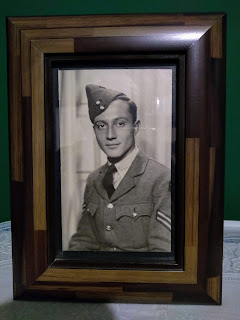 This is a photo of my father, taken sometime during World War II. I think he was rather handsome, but I may be prejudiced! He must have been about twenty years old.

After he retired his sight started failing and he eventually came to live with me for the last ten years of his life, by which time he could only tell light from dark. He worked in the automotive industry, in England, Portugal and here in Brazil but his real passion was photography and he actually won prizes for some of his photographs. It was such a shame that when he had more time for his hobby he was unable to practice it.