I pinched this subject from John at Going Gently. I liked his idea of showing one´s most treasured possession. This is mine. 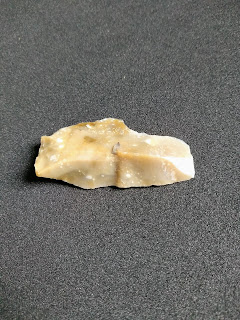 I know it looks very nondescript but it is actually a Stone Age flint knife, several thousand years old.

I found it years ago when I was on holiday with my husband. We were walking along a hilly path near Robin Hoods Bay in Yorkshire when I saw it lying on the ground in front of me. Intrigued by its shape I picked it up for a better look. I thought it looked rather like a flint knife but I was sure I must be mistaken and that it was wishful thinking on my part. After all, it was just lying there on the surface, on a well-used public footpath. I put it in my pocket and after the holiday showed it to my tutor at Manchester University where I was taking an extra-mural course in archaeology. To my surprise and delight after showing it to a colleague he confirmed that it was indeed a flint knife.

How it came to be on the path was anyone´s guess. Maybe it washed out of a bank or worked itself to surface, or even was dropped by someone who had found it elsewhere. I will never know. As someone who is fascinated with prehistory, it is certainly my one of my most treasured possessions. I try to imagine who made it, the people who used it all that time ago and it leaves me awestruck.