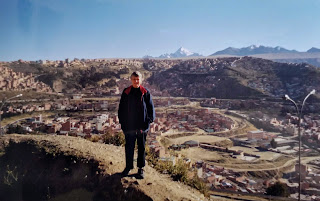 We flew in to La Paz for the start of our journey. La Paz in Bolivia is the highest city in the world at 12,000 ft.The idea was to begin at a high altitude and over seven days travel by coach visiting interesting places as we slowly dropped down towards Cuzco in Peru. This meant we would be more acclimatized to the altitude by the time we started the strenuous part of our trip. Cuzco is still high at 11,000 ft and the highest point on the Inca Trail is about 14,200ft.

When we arrived at our hotel we were immediately offered coca tea and given coca leaves to chew (very bitter!) to help alleviate altitude symptoms, and yes, that is where cocaine comes from! All hotels along our route offered the tea and our local guides always had leaves which they offered to us. In that form it is only a mild stimulant. I don´t think the coca really helped me as the first night I kept waking up short of breath and with a bad headache and I was nauseous for several days but the symptoms slowly wore off over time. 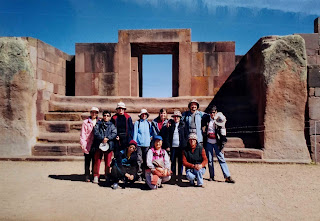 This is our group on the first day, at Tiwanaka, a pre-inca archaeological site. I am third from left at the back. Every day as we headed towards Cuzco we stopped at fascinating places made all the more interesting as we always had a local guide to show us around and talk about the sites. Most of them spoke Portuguese, thank goodness. 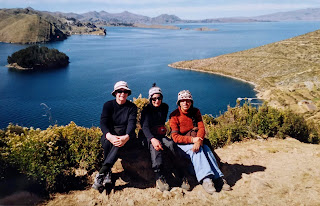 On Ilha do Sol (Isle of the Sun) on Lake Titicaca, I´m on the left. The island has some pre-Inca ruins and we had a lovely long walk before returning to our boat. These are two of the island´s residents. 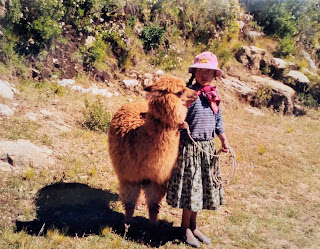 There are some other islands on Lake Titicaca at Puno which are truly fascinating. The local inhabitants, the Uros, have created floating islands made out of reeds on which they live in reed houses. It was most disconcerting to step off the boat and feel the 'ground' move beneath your feet, it yielded as you walked. I kept worrying that my feet were going to go through the reeds and I´d end up in the lake. I was also feeling very queasy that day which didn´t help. 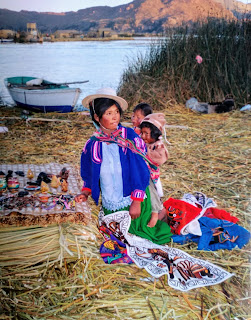 A Uros lady selling trinkets to the tourists. They are a very colourful people. I think those were her children. Imagine the risks with toddlers on a floating island! If they were mine I´d probably keep them tethered lol. I presume the Uros main source of income must be fishing. One of the striking things about them was their very rosy cheeks, especially the children, and runny noses.