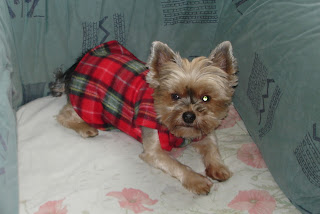 Toby has acted strangely a couple of times recently and I am wondering if he is going deaf or becoming a bit senile.

I have a baby´s safety gate to keep him out of the kitchen as he follows me everywhere and in there gets under my feet hoping I´ll drop something edible. He stands at the gate waiting for me to come through when it is time for his dinner. I had just fed him and gone to do something when I headed back to the kitchen. Toby had eaten his food and was standing staring fixedly at the gate as if I were still in the kitchen and he was waiting to be fed. I spoke to him to let him know I was actually in the room with him and he completely ignored me, even when I touched him. I had to go in and out of the gate before he seemed to realise I was in the room with him. I know he can´t really see although I believe he can perceive movement, and he mostly follows me by sound and smell, but I can´t really understand this behaviour..

There was another incident a few days ago. I was sat at my computer, where Toby usually lies on his cushion beside me. I heard him crying and found that he was sitting behind me, with his back towards me, staring at the wall and whining. I tried to distract him but he would not stop staring or crying and in the end I had to pick him up and take him through to another room. I shall keep him under observation but I hope it doesn´t mean a trip to the vet as he really hates that