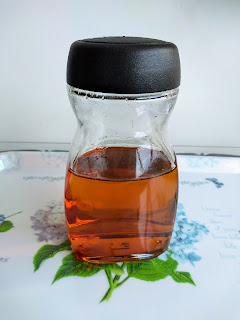 Golden syrup is unavailable here which I have found frustrating as it is one of the ingredients in several recipes I like to make. Whenever I visited the UK I brought some Tate and Lyle syrup back, but eventually I would run out and now of course travel is out of the question. I was delighted to come across a video on YouTube the other day which showed how to make golden syrup and amazed to find it basically consists of boiling down sugar and water with a wedge of lemon. Although you simmer it for a long time for some reason it doesn´t burn or caramelize and the end result tastes just like the bought syrup. Who knew it was so simple!
Posted by Sansthing at 20:49